Antiretrovirals and The Introduction of Truvada

HIV (the human immunodeficiency virus) is a serious disease that has massive potential to destroy lives and has posed a threat to public health for decades. It took many years for doctors and scientists to discover effective treatments for the illness, and in the meantime, HIV caused immense human suffering. Truvada is one such treatment, and while it has been promoted as a safe way to both treat and prevent HIV, the truth is that it should never have been approved in the first place. Truvada is a dangerous drug that can cause debilitating injury and illness. If you or a loved one has suffered after taking Truvada, you deserve to see justice served and you may be entitled to financial compensation.

HIV works by destroying T-cells, which are vital components of your body’s immune system. When HIV attacks a T-cell, it uses that cell to make more HIV which then travels throughout the body, attacking more cells and creating more virus.

Antiretroviral drugs are essential in the fight against HIV/AIDS. They work to prevent retroviruses like HIV from replicating, thus slowing the progression of the illness. It sounds relatively simple but creating a safe and effective retroviral therapy has not proven to be an easy task. The first HIV drug, AZT, was approved in 1987 but caused devastating, toxic side effects and even death.

In the mid-90’s, scientists discovered that a combination of at least three retroviral drugs could be effective in combating HIV/AIDS. The combination was known as Highly Active Anti-Retroviral Therapy (HAART), but while effective, this treatment still caused serious side effects.

Truvada hit the market in 2004 as an approved drug to drastically reduce viral loads in those infected with HIV. The introduction of drugs like Truvada meant that HIV patients no longer needed to take many pills daily and HIV was no longer seen as an automatic death sentence. In 2012, Truvada was also approved as a preventative treatment for those at high risk for contracting HIV. Truvada was viewed as groundbreaking and a potential miracle treatment because of its effectiveness at managing and preventing HIV primarily due to its use of TDF (Tenofovir Disoproxil Fumarate).

TDF and TAF: What is the Difference?

TDF drugs like Truvada block HIV from replicating and multiplying, thus reducing the amount of HIV in the bloodstream. Tenofovir Alafenamide Fumarate (TAF) drugs work similarly and are also highly effective but are absorbed much more quickly by the body and can, therefore be given in smaller, safer doses. Many patients who were prescribed TDF drugs like Truvada would have been better off had they been prescribed TAF drugs instead. Both drugs slow the progression of HIV, but TAF drugs limit the impact and potential danger posed to the body.

You may have seen us mentioned in ...

The Truth About Gilead Sciences

Gilead Sciences is the biopharmaceutical company that manufactures Truvada. Multiple lawsuits over the past few years have alleged that:

If these claims are proven true, Gilead Sciences acted in an exploitative manner, fueled by nothing more than corporate greed. They must be held accountable for the harm they have inflicted on the American public.

Side Effects of Truvada

Taking Truvada can cause a variety of side effects. Some common, less severe side effects include:

While these side effects may not be life-threatening, they can potentially be symptoms and warning signs of more serious complications of taking Truvada.

When you work with us, you will get a dedicated legal team with expertise in:

Providing personalized service so that you can feel confident that your case is being handled with the highest level of care.

Let Us Help You

If you or a loved one have used Truvada as a treatment for HIV and subsequently developed illnesses or injuries including osteoporosis, kidney or liver damage, or lactic acidosis, we urge you to contact a qualified lawyer as soon as possible. A Truvada lawyer will be able to evaluate your case and navigate the complex legal process on your behalf.

Fighting a defective drug case in court can be difficult because you need to be able to prove:

Pharmaceutical companies wield immense power, and as such, can fight hard to avoid liability. They have access to a strong network of experts and may be able to produce their own evidence as a way of shifting the blame onto doctors or patients. You need a qualified legal team on your side to help you navigate the complexities of this process. We will fight tirelessly to ensure that you receive the maximum fair compensation for your suffering, and you see justice served. Speaking up is a brave action and your courage and effort can help make pharmaceutical drugs safer for millions of people.

Let us advocate for your rights while you focus on healing.

Truvada Lawsuit Frequently Asked Questions (FAQ)
What is a mass tort case and is it the same as a class action lawsuit?
Simply said, mass tort cases occur when one wrong action has caused harm, injury, or illness to many people. Mass tort cases have the potential to affect large-scale change within corporations. They are like class action lawsuits in the sense that many victims come together against one defendant (usually a corporation) or a small group of defendants, seeking justice for their suffering. In a mass tort case, you must be able to prove that many people have suffered injury or harm by the same defendant. This is often the case in defective drug cases.

In mass tort cases, while the same defendant is responsible for the damages in question, the plaintiffs are treated as individuals. This is an important distinction between class action and mass tort lawsuits, as class action lawsuits see plaintiffs treated as a group and represented by one individual. This is also important because of the way that it affects compensation. Mass tort cases allow individuals to recover damages based on their specific injuries, illnesses, and suffering while class action suits recover the same damages for all plaintiffs regardless of specific circumstances.
What is PrEP?
PrEP stands for pre-exposure prophylaxis and is a preventative measure used to reduce the likelihood of becoming infected with HIV. PrEP is intended to be used in conjunction with other preventative measures including condoms and safe sex. Truvada is currently the only medication approved for PrEP.
How long do I have to file a lawsuit?
It is essential that you consult a qualified Truvada attorney as soon as possible because you will be prevented from taking any legal action once your state’s statute of limitations has expired. Generally, you have somewhere between two and five years to file a personal injury or defective drug lawsuit and you will be unable to seek justice once this time limit has passed. The clock begins at the time of injury/illness discovery. An experienced Truvada lawyer will be able to help ensure you meet all necessary filing deadlines.
What are other TDF drugs?
There are five medications currently available that contain TDF. All are manufactured by Gilead Sciences. The five TDF drugs are:

Atripla
Complera
Stribild
Viread
Truvera
How do I know if I have grounds for a lawsuit?
If you have taken Truvada and subsequently experienced any health issues, illnesses, or injuries related to the following, we want to know.

If you have developed any of these health issues after being treated with Truvada, you may have grounds for a lawsuit. We understand that each client has a unique case and has experienced their own suffering. As such, we are prepared to perform a thorough and detailed evaluation of your situation to determine appropriate next steps. The important thing for you to know right now is that we are on your side and our team of qualified lawyers can help you to move forward. 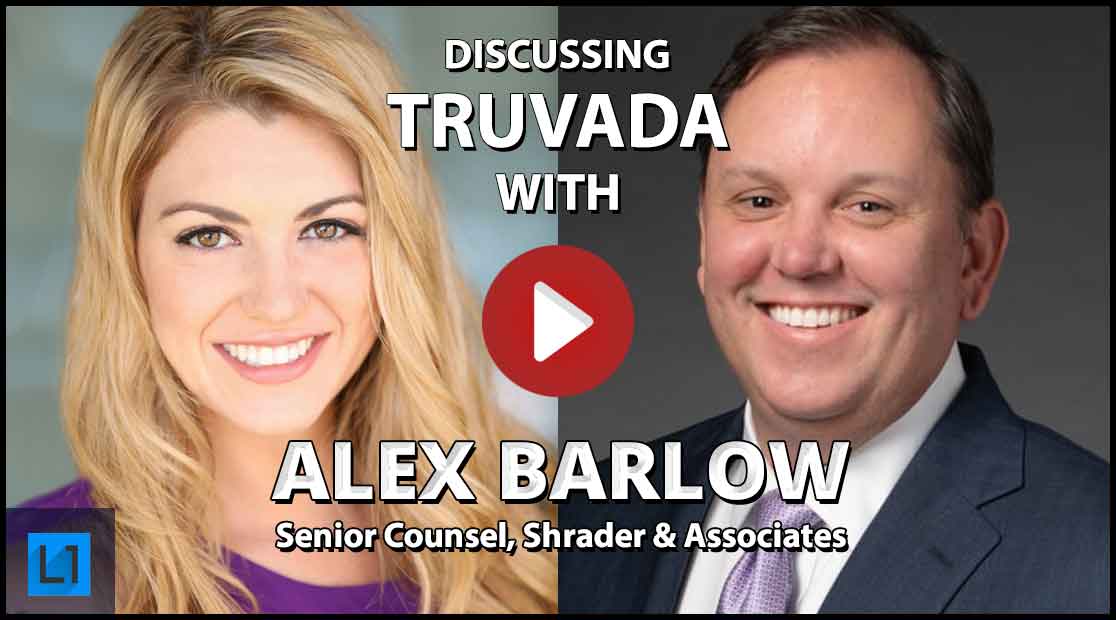 Join us as we speak with Senior Counsel, Alex Barlow, from the law firm of Shrader & Associates. In this interview we discuss details related to Truvada litigation and different aspects regarding Gilead Sciences potential mismanagement of this drug.

Alex Barlow has devoted his practice to complex litigation on behalf of injury victims. Alex considers himself fortunate to have tried and won cases on behalf of a diverse spectrum of plaintiffs – ranging from workingmen stricken with mesothelioma all the way to Fortune 500 companies.

Alex has represented the Attorneys General of eight states against large pharmaceutical companies over the mismarketing of their drugs. Alex also served as counsel for thousands of men and women who suffered cardiovascular injuries due to complications from certain drugs. Alex is currently exploring cases related to TDF drug injuries due to the negligence of their creators.

Without knowing the actual scientific studies behind asbestos, it is hard for the average individual to really know how high their risk is of getting sick.

Due to the Covid-19, virtual hearings have begun being offered for some court cases to lower the risk of transmission.

What Does the Public Think of Lawsuits?

Dependent on the situation at hand, it is difficult not to develop a personal opinion in any lawsuit or on the overall scope of lawsuits in general.

View All Videos ...
Call Us Book Appointment Text Us